William took out his licence in 2006 and was originally based in West Sussex. However in 2020 he moved into Newmarket’s state of the art Rathmoy Stables where he won with KVT’s Sir Busker, his first runner sent out from there. He followed this up with his first Royal Ascot winner with Sir Busker the same year . William was previously assistant to Ed Dunlop and the late John Hills.

Having trained over 390 domestic winners – including successes at Group 2, Group 3 and Listed level, he is a very hands on trainer with around 60 horses in his yard. William had a record 2022, winning over £687,000 in prix money. 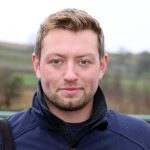