Equality gets back on track with a third at Bath yesterday

The Charlie Hills-trained Equality ran a much better race when finishing third at Bath yesterday, being beaten under a length by the winner. He was a bit buzzy still beforehand and raced keenly early on in the race. However, he soon put his head down and looked to be travelling ominously well until stumbling with about two furlongs to run. Whilst it did not appear to lose him much ground, Kieran felt it cost him momentum and possibly the race. He added that the gelding did get tired late on, probably paying for his early / preliminary exertions. Most importantly, this was a much better run and hopefully it will have boosted his confidence after two tailed off efforts (albeit where he had excuses). 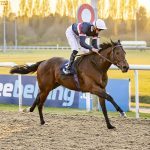 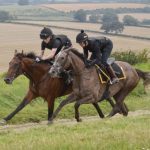 Attache runs at Kempton on SaturdayNews